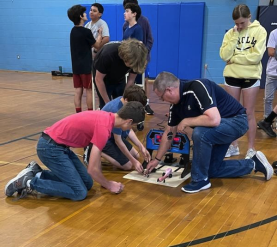 Students in 8th grade STEM classes at BMS have been studying transportation technology per DESE guidelines. During their investigation they looked into the four forces that act upon a transportation device, thrust, lift, drag and weight. They used this knowledge to design a CO2 powered dragster that would optimize speed. Once they settled on a design, they made a styrofoam mockup and placed it into a wind tunnel to evaluate their designs' aerodynamics. Students used this information to either redesign their dragster or start building their balsa wood model for racing.

On Friday, June 10th, the nine class champions, in front of the rest of the 8th grade students, teachers and administrators, held the 2022 Beckwith Dragster finals in the gymnasium. As the races started there was anticipation in the air as race teams got ready for their turn to show how fast their car was. The drag strip was scaled to a 1⁄4 mile at 19 meters long and the times were electronically captured. Mr. Sampson assisted in recording the times in 100ths of a second and using a mathematical formula he converted the time into miles per hour, mph. The individual races were close, some cars winning by less than 3/100ths of a second.

Going into the last race, the Makinsta Car built by Mackinley and Logan, was in first place with a speed of 41.32 mph having covered the course in 1.03 seconds. This first place ranking was short lived as the last two cars down the track bettered their time. In the last race Isaac and Nathan’s Lightning McQueen finished with  a time of 1 second flat and a speed of 42.56 mph but fell to the 2022 Beckwith Middle School Dragster Champions Grampa-Wheel-E. Grampa-Wheel-E, belonging to Riley, Julia and Nick, finished the course in 0.96 seconds at a speed of 44.33 mph to take home the title and the trophy.

All of the students involved applied what they learned in class to design and build their dragsters, and had some fun along the way.